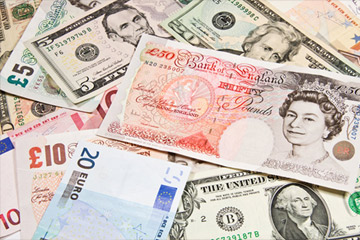 The dollar was higher against other major currencies on Monday as investors grew optimistic after the Senate passed a tax bill on Saturday.
The U.S. dollar index, which measures the greenback’s strength against a trade-weighted basket of six major currencies, was up 0.42% to 93.20 by 12:05 PM ET (5:05 PM GMT).
The dollar was boosted by expectations that tax cuts for corporations will stimulate the U.S. economy, and also drive Treasury yields higher, as the government becomes more dependent on debt due to reduced tax income.
The GOP will still need to draft the Senate version of the tax bill with a version passed by the House before it can send the final bill to President Donald Trump.
The dollar gained ground against the yen, with USD/JPY advancing 0.55% to 112.18.
The euro slipped lower against the dollar earlier in the day, with EUR/USD unchanged at 1.1848.
Meanwhile, sterling slipped after being broadly higher following reports that Britain and the European Union reached a deal on the Irish border. GBP/USD fell 0.06% to 1.3464 from around 1.3516 earlier.