Dollar stalls as next step in US tax reform awaited, Antipodeans advance 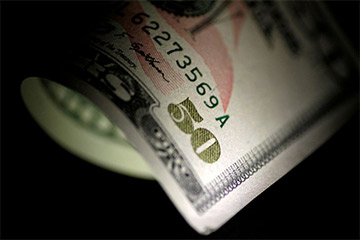 The dollar dipped on Tuesday, as investors waited to see how the next step of the U.S. tax reform legislation proceeds rather than extend the rise made by the dollar at the start of the week following the U.S. Senate’s approval of the tax bill.
The Senate must now reconcile its version of the bill with legislation passed by the House of Representatives.
“The upcoming negotiations on the bill between the Senate and the House are likely to decide the dollar’s direction this week,” said Shin Kadota, senior strategist at Barclays (LON:BARC) in Tokyo.
The dollar index against a basket of six major currencies eased 0.15 percent to 93.050 (DXY) after gaining about 0.3 percent the previous day.
The euro was a shade higher at $1.1874 after losing 0.3 percent overnight.
The dollar nudged up to 112.550 yen , but remained well off the 2-1/2-week high of 113.090 struck on Monday.
The House of Representatives voted late on Monday to set up formal negotiations with the Senate, bringing the final bill a step closer. But deliberations could still take weeks to complete.
“A large portion of the enthusiasm for the tax bill passing the Senate had already been factored in when (Republican Senator John) McCain gave his endorsement last week,” said Kadota, explaining the dollar’s loss of momentum.
The pound was 0.1 percent lower at $1.3465 after wide swings the previous day.
Sterling initially spiked to $1.3538 on Monday on hopes that divorce talks between Britain and the European Union would make headway.
But it slumped to $1.3415 after European Commission President Jean-Claude Juncker and British Prime Minister Theresa May failed to reach an agreement with Irish border issues proving a sticking point.
Sterling had reached a two-month high of $1.3550 on Friday on expectations that Brexit negotiations were beginning to bear fruit.
“The pound has become a vehicle for speculators, with fundamentals taking a back seat,” said Masashi Murata, senior currency strategist at Brown Brothers Harriman.
“The dollar is not an easy buy when long-term Treasury yields are stuck below 2.4 percent under the current yield curve flattening. Under such conditions, speculators’ flows tend to make their way to the pound, rather than the euro or yen, as the Bank of England is slightly more hawkish than its European and Japanese counterparts.”
The 10-year Treasury yield (US10YT=RR) reached a seven-month high just below 2.50 percent in late October but has been stuck below that level since, firmly capped with the U.S. yield curve reaching its flattest in a decade.
The Australian dollar rallied on upbeat domestic retail sales data, pulling along the New Zealand dollar in its wake.
The Australian dollar was 0.6 percent higher at $0.7639 after data showed strong retail sales in October after months of lukewarm demand.
With its rally well under way, the Aussie showed little reaction to the Reserve Bank of Australia’s well anticipated decision to keep its cash rate at a record low of 1.5 percent.
The New Zealand dollar firmed 0.45 percent to $0.6890 , paring the previous day’s losses.