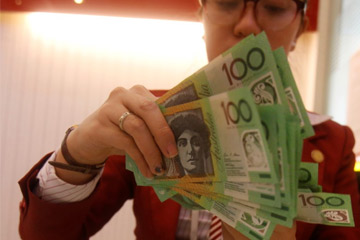 The Aussie gained in Asia on Tuesday as the central bank pointed to potential wage growth ahead as it kept rates steady and retail sales came in stronger than expected.
USD/JPY changed hands at 112.54, up 0.12%, while AUD/USD traded at 0.7641, up 0.47%. Australia reported the RBA rate review for December held a steady cash rate of 1.50% as expected.
In China, the Caixin services PMI came in at 51.9, better than the reading of 51.5 expected for November.
Earlier in Australia, the current account data for the third quarter came in at a deficit of A$9.11 billion, compared with a deficit of A$9.2 billion seen. As well, retail sales rose 0.5%,for October, better that the 0.3% on month gain seen. Australia also reported the AIG services index for November at 51.7 with a previous month reading of 51.4.
The U.S. dollar index, which measures the greenback’s strength against a trade-weighted basket of six major currencies, eased 0.02% to 93.03.
Overnight, the dollar rose against a basket of currencies on Monday as the U.S. Senate approved a tax bill, while a slump in the pound on reports of a no Brexit deal lifted sentiment on the greenback.
US senators passed a tax bill aimed at overhauling the U.S. tax system for the first time in three decades. It was passed by 51 votes to 49. The Senate and the House of Representatives is expected to get talks underway this week to reconcile their respective bills.
The tax cuts, widely viewed as inflationary, boosted the dollar to session highs amid economic data showing factory orders for October topped expectations, raising expectations of the underlying strength of the US economy.
Factory goods orders fell 0.1% amid a drop in demand for both civilian and defense aircraft, the Commerce Department said on Monday.
Also boosting the dollar was a slump in sterling after Britain and the EU failed to reach an agreement to move to the next stage of Brexit talks. European Commission President Jean Claude Junker said “it was not possible to reach a complete agreement today.”